For me, a 4 hour drive is a long haul to go sailing with Mobjack only 1 1/2 hours away. However, MASCF is an exception. Almost 100 small boat enthusiasts, many with crew, bring their respective craft to enjoy friends new and old, savor some seafood and get in a bit of boating. Last year’s event was washed out by hurricane threats. This year was just our second attendance in what was the 33rd running. Friday and Saturday were wet and windy. Sunday, still overcast, offered barely a whisper. Regardless, the time in Saint Michaels was fun. My youngest son and I took kayaks we built and left UNA behind. She was missed, but we got rides from our pal Dale to watch Saturday’s race in his Ben Garvey outboard. With an almost 7′ beam, he can set up a tent  in the boat’s floor and still have room to keep his skin-on-frame kayaks aboard. Complimented with a 40hp four-stroke and a folding bimini top, Dale may have found another attractive access to the water.

Later in the day we paddled around the harbor to take in the sights. This town has been a regular stopping point over many years of cruising the Bay. The visit never grows old. Though the boutique shops seem to be taking over the main drag, pockets of childhood memories still survive. This is in no small part due to the Maritime Museum there. Now that I have been to Mystic, I can say it reminds me of that fine museum on a smaller scale. In this quaintness, St. Michaels is more approachable. At this festival, one can wander amongst the current builds and renovations. You are welcomed to nose around and we did.

After this past weekend’s trip to St. Michaels, I left the kayaks on the truck’s roof for washing and storage yesterday. That didn’t happen. I thought another paddle might be good. This morning’s breakfast was quick: coffee, boiled egg and toast followed by a long walk for the dog (he’s been acting up. Now he is sleeps at my feet). Our stroll was pleasant with cooler temperatures and early sunshine. That convinced me to drive down to the local park and check out the river. Despite the rains, the conditions were good. My Outer Island kayak at 37 pounds is easily hauled around, especially with the dolly I built. Loading the boat with necessary gear, I wheeled it from the parking lot down to the floating pier.

The water was muddied and current quick. The surface was smooth and the boat moved with little effort. 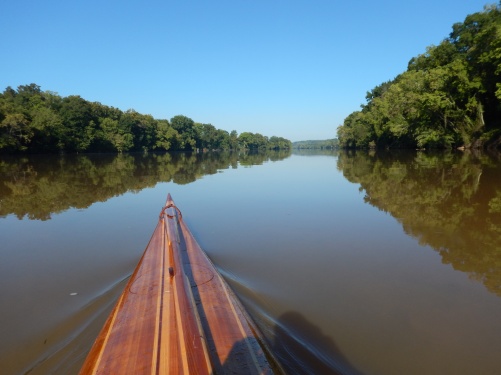 Maybe 3/4 of a mile up-stream I discovered a Blue Heron resting on a downed tree protruding from the south bank. I’m surprised I can glide in so close and quietly readied my camera. The bird remained frozen, watched this intruder, but in the 15′ range he took flight further up stream. We followed.

Another 150 yards on we found our bird again. This time he was more poised to fly and took off just as we drew in. Crossing the water, the pursued headed up the mouth of an overgrown creek entrance.

At  this point I felt a tinge of guilt in the pursuit, but the beauty of the thing and maybe the “hunt” led me on. Of all the times I’ve passed this creek, I’ve never ventured up it.

A whole other world was in there. The shade was cool. Song birds greeted us (or gave warning of our presence).

A short distance along, the path got crowded. However, we did find our prey. This time we caught him as he bolted.

I had the shutter speed and aperture all wrong but, this is evidence of the third sighting. Shortly there after, with little room to maneuver, we turned for home.

Not focused on finding Big Bird, I’m struck by the beauty along the way. We will have to return in a few weeks when the colors are full-out.

Round trip time was maybe 2 hours total. I decided I need to stop taking this backyard treasure for granted.

Occasional periods of drudgery have risen throughout this build.  A few days ago I hit one of those “bumps” and had to walk away from the boat for a bit. The sanding and faring was getting to me, but what really slapped me was a warped centerboard. It went from a straight and true foil after glassing one side, but the second side glassing created a potato chip. I had added graphite to the epoxy for lubrication purposes and I expect the black heat sink got too much sun when I turned my back. I’m not sure if I can remove the glass to correct it or more quickly just start over. So, we went for a paddle.

The kayak trip restored a better outlook, but I wasn’t ready for the board or more sanding so, I lay the spars and sails in the backyard, studied how to lace and add controls, and finally raised the sails. That sent me dreaming again. Now I can face the drudgery again.

While I did not complete the running rigging entirely, I have got it all figured out. The process was an enjoyable puzzle. And, I really love the simplicity of this rig. I believe she will be light, fast, and responsive.  (A decent centerboard will probably help too.)
Lastly, I sold my Penguin dinghy yesterday. Watching the new owner haul her out the driveway was a sad moment. She is a boat that’s beautiful from all sides, but her insides and outs needed a new coat of varnish and fresh black paint. The truth is she hadn’t left the shed for maybe 5 years and deserved to be loved better. The proceeds will provide a new trailer for the new love. Selling a boat and a trailer for a trailer somehow doesn’t sound equitable.
Anyhow, here is to “Tar Baby”. Someone told me you couldn’t have a boat named that nowadays. Really? What is the world coming to? Ignorance for all?

While the kayak is light, the added accessories (paddle, life jacket, pump, spray skirt, lunch, etc.) can make the load awkward, if not heavier, and hauling the whole kit any distance can be trying. The solution? a good dolly. I decided to make my own. 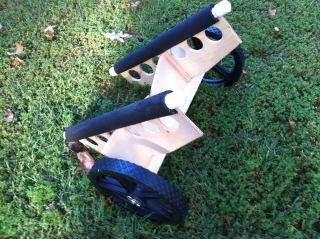 I used 17″ plastic wheels, 1/2″x2’x2′ birch plywood, some 1″ PVC with caps, and machine bolt for axles. The ply was cut into 3 pieces and slotted. The heads of the bolts were ground off and holes for cotter pins drilled through the shafts. These were then epoxied into a wood channel. The PVC was cut to length, slotted to slip over the 1/2″ ply and secured with screws. Once the pipe was capped, split pipe insulation was glued onto the pipe.

The entire assembly can be broken down readily for ease of storage. The “lightening” holes really serve to strap the kayak to the dolly and they add a bit of style. After a good sanding I’ll put a few coats of polyurethane on the works. I’m very happy with the results. It is very serviceable.

Just a couple pics my daughter ( A Girl Named Leney ) took that I liked of the boat (and some dude with hairy legs).  I continue to make small improvements to the details, but they are slight and I’ve maybe 20+ hours in the boat now.

I recently sold “Chica”, my Classic Moth. Felt like a traitor, but she was really too narrow for my 200 #s. I may build another down the road. Wonderful, light 75# hulls, and responsive open class boats (if it fits in the rule box, its a Moth). Still basically a garage built class, the Moth evolved into a taller rig to become the International Moth. I sailed such as a teen. At 14 I could pick it up from the beach or lawn and walk it to the water solo. They would require your constant hand as they capsized if left alone, but boy were they fast. Those boats grew hydrofoils and now skip across the surface like a water bugs. Anyhow, here are some shots of old Chica: 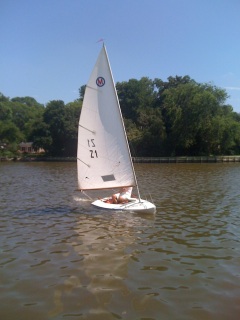 Dedicated to the study & appreciation of wooden boats. WaitemataWoodys® was founded upon a desire to tell the stories & a need to archive the history of our classic wooden boats, the craftsman who built them & characters that owned & crewed on them. To share - email your photos, video's & stories to Flora McKenzie at waitematawoodys@gmail.com - Special thanks to marine author & historian Harold Kidd. Click the follow button at the bottom right of the page to get email alerts on new & updated stories. WW gets a LOT of emails every day - we like that, but sometimes we just can't answer them all, it's not that we're lazy or rude - just busy working on the next story :-) alan houghton - WW founder ©2021