Monday afternoon I visited Luna. She has new sails. I wanted to see them raised. Sadly, the slides on both mizzen and main were too large (I had measured and relayed the info, but …). Bummer. Replacements have since been mailed. 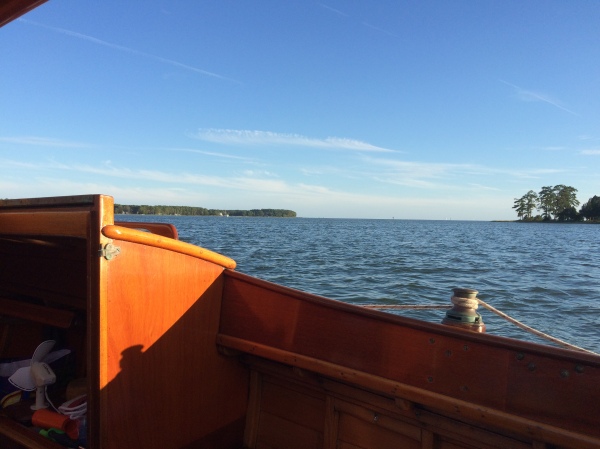 After adding a couple of bronze eye straps for securing the boat cover, I hanked on the new jib and went out into the river to anchor briefly  and scrub the bottom. The slime wasn’t bad, but you could tell it was there. Luna just wasn’t as fast. And she is. A few barnacles were on the base of her keel. I probably forgot to hit that portion which rested on blocking at haul out. Getting back into the boat turned out to be a bear. The webbed loop ladder used for UNA twists too much. Those chin up routines from age 13 are wearing out. I’ve some ideas on a better homemade solution. After raising anchor, we had a delightful beat out into Mobjack under full sail. Luna collected a few compliments from other boaters as the two of us slid along. Once out we did an about face and reached back up the river a good ways before returning downstream. The evening was near perfect. I decided to stay. The hook was dropped and cocktails offered as the sun set with music playing low. Too lazy to fix dinner, I opted for cake. A great diet. Recommended. 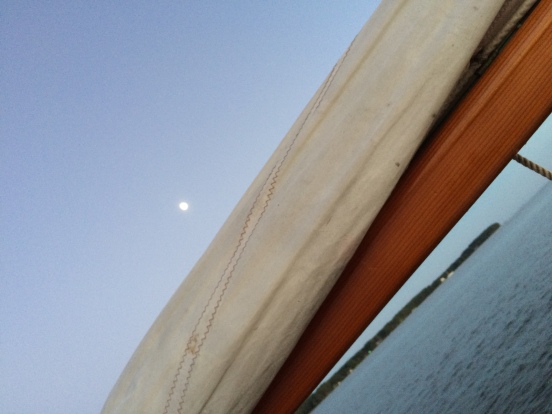 One favorite tune shuffled after another. Dare I say it? It was mostly Spotify. Somehow it doesn’t seem like my music. I’m sure some take self-righteous exception to its use, but I like it and mute the ads. I will say the site’s “related artist” button has radically expanded my music library. Oh, I still buy CD’s. However, now many are discoveries from Spotify. So, what kind of attitude is that? Archaic? Hypocritical? Confused throw back? Fine. I’m anchored in my favorite place on earth, just watching the world spin.

At 22:00 I’m done. With no bedroll or pillow, I throw on extra shirts and sleep comfortably through the night. At 05:00 the “night” ended as the watermen went to work. The rumble of their engines and gentle waves nudge Luna for an hour or so before I move to see the day. It was cool, sunny, and otherwise quiet and glassy.

Had a quick breakfast of yogurt and oranges slices. Coffee would have been good, but the night’s laziness lingered. That ended as I motored to the pier to work on cleaning up last Fall’s electrical renovations. I had replaced the 12v panel for reading lights and 12v outlets (P & S) to charge gadgets and run Caframo fans. The contortions needed to access some of this was ridiculous. Maybe it is age. Anyhow, that task can be scratched from the list. By noon the heat was coming on. I covered Luna and left. Worth the drive. Here’s some video proof-

One thought on “Just One Night”

Dedicated to the study & appreciation of wooden boats. WaitemataWoodys® was founded upon a desire to tell the stories & a need to archive the history of our classic wooden boats, the craftsman who built them & characters that owned & crewed on them. To share - email your photos, video's & stories to Flora McKenzie at waitematawoodys@gmail.com - Special thanks to marine author & historian Harold Kidd. Click the follow button at the bottom right of the page to get email alerts on new & updated stories. WW gets a LOT of emails every day - we like that, but sometimes we just can't answer them all, it's not that we're lazy or rude - just busy working on the next story :-) alan houghton - WW founder ©2021