Approximately 560 man hours over a 10 month time frame ended this morning with a sail. And I didn’t miss any of the TV most people were watching.
What else can I say? Too much to tell, but a dream from boyhood and satisfaction from labor was realized on the Mattaponi River at West Point, VA. How can I report on this maiden voyage? There is so much to tell and then so much that simply can’t be relayed. Suffice it to say that Una floats like a feather, moves with grace, and slips along on a breath of air. She is, quite simply, a delight.

Iain Oughtred designed a superb little vessel. I took the better part of the morning rigging Una to confirm I had all the pieces. I dreamt I left the mast last night. Almost left the mizzen. Here are the beauty shots before travels, before I wacked her with the anchor after telling myself I couldn’t, and before she rubbed a pier. Now she is seasoned and ready for adventures. 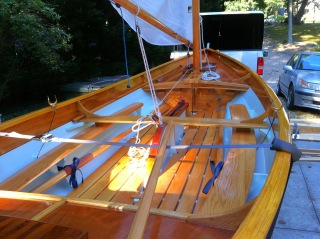 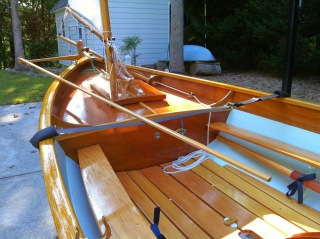 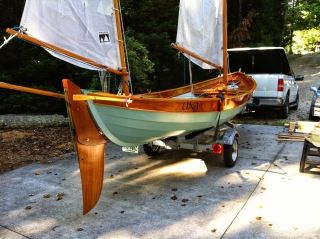 The trip to West Point was uneventful. I didn’t notice the trailer was following though I stopped twice on the interstate shoulder to satisfy myself that all was AOK.

At the ramp, the traffic was constant with boats coming and going. Re-rigging took maybe 20 minutes. I had to back the trailer until the brake lights were submerged. We’ll see how long they last. On Off Center Harbor Geeoff Kerr has his lights on a 2x strapped on top of the boat. That is more visible from the rear and keeps the lights out of the water. We’ll wait on that alteration.
So, I rowed out into the river, set the anchor (16# Bruce with 10′ chain), and raised the mizzen, sheeted it hard, and then raised the main. All was simple and worked like a charm until I worked the shear while raising the anchor. Now the boat is christened.
There wasn’t much wind. Hardly any most of the time, but puffs came and went to experience th boat’s potential. Since the main extends only 2/3 of the way aft in the cockpit you can stand up with the push stick and slide along. The stick was counter intuitive after years of dinghy sailing, but by the end of the sail it was almost second nature (until I swapped hands, but that will come too).
I’ve a laundry list of “improvements” for Una. Some are finicky. Others are necessary and known, but not deciphered until she hit the water. Perhaps I’ll elaborate at a later time … or not. I expect to be sailing a lot over the next few months into the Fall. What a boat! I’ll leave you with a few pics from the water. Adios- 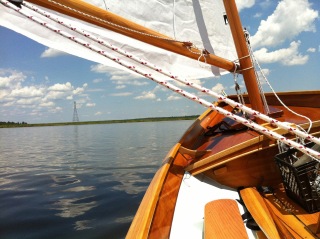 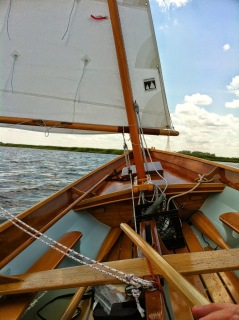 6 thoughts on “A Dream Becomes A Delight”

John Cowgill: Stories of the Railroad

Stories of my Railroad Journeys

Dedicated to the study & appreciation of wooden boats. WaitemataWoodys® was founded upon a desire to tell the stories & a need to archive the history of our classic wooden boats, the craftsman who built them & characters that owned & crewed on them. To share - email your photos, video's & stories to Flora McKenzie at waitematawoodys@gmail.com - Special thanks to marine author & historian Harold Kidd. Click the follow button at the bottom right of the page to get email alerts on new & updated stories. WW gets a LOT of emails every day - we like that, but sometimes we just can't answer them all, it's not that we're lazy or rude - just busy working on the next story :-) alan houghton - WW founder ©2023

Life and Learning on wooden boats