In general, I could forgo much of summer as I prefer the Spring and Fall for sailing, but that’s not nearly enough time, so we make amends for the summer. Here in Virginia, it can get hot enough to burn your hide in short order. In fact two days ago it was 99 degrees F and humid, just down right sweaty. (Try Texas you say? Yep, lived in Houston for a couple of years. Nice brisket, but five months of August). To add insult to summer sailing here, if your evening holding ground is in the wrong place and time, the “squitos” and “no-see-‘um” come looking for you. Sometimes all of them. To handle the day, you can slather on goo and wear a sombrero to avoid a burn. Now the end of the day requires a fair wind anchorage, shade from an awning, a cool swim with fresh water rinse, and a cold drink(s) to make everything right. It is possible. And, as long at there is a breath of air to knock down the bugs, even the hotter nights can be made comfortable with just a sheet and a small 12v fan. I particularly like the Caframo fans. They have a low draw, are quiet, and really push the air. I’ve used them for years. I now carry a couple on LUNA.

Essentially, there is a fine edge between doing summer sailing right or wrong. Perhaps I’ll post on LUNA’s small improvements like a new auto bilge pump, a bigger Ah battery, and a better electrical distribution panel later. Though I didn’t feel like my boat was really ready to go overnight, I gladly took up an opportunity to sail with Curt and Doug on Mobjack along with their Drascombe and Shrimper.

I sailed for just over one night. Curt writes of their extended trip here.

Mobjack Bay offers four significant rivers worthy of exploration: the Severn, Ware, North and East. Several lesser rivers and bays also exist, but may be better for cooler temps. Our trip started, stopped, and started from the East River. Doug returned for a cooler. I for a bag of groceries and to swap the mainsail cover I mistook for an awning. Finally organized and together, we took a good swim to kill the early afternoon heat. As the breeze built from the south, we decided to sail up the Ware and anchor behind Windmill Point ( a common name on the Bay).  This seemed just open enough and secure towards Roans Wharf. 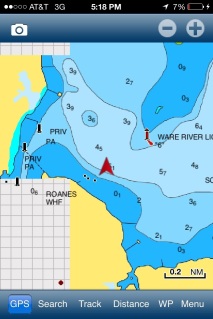 Here are two clips of LUNA’s windward action. It is near impossible to get her rail in the water. She hits a point where she digs in her shoulder and holds there. Still,  you can drag your hand in her wake as she slips along. Add to that her full keel tracks like she is on rails. All done gently, all with purpose, and up tempo. She is, first and foremost, a sailboat and I love that purity.

… and as the breeze stiffened:

Curt and Doug explored portions of the North River before catching back up with us. My late afternoon at anchor involved more swimming, some reading (napping under the awning), and a little straightening up of the cabin. No offense to UNA, but having the ability to leave the cabin junked up is nice. She’ll be rewarded with a sail in Maine this summer, if not here sooner.

Annie and Tidings rafted up with us later. We swam again until sunset. Doug explained that what I’d been calling horse flies were actually Geenheads which were attracted to motion and CO. so. don’t move or breathe when these nasty bugs are out. If they were around after a few ice cold beers, I didn’t notice. Generally, we enjoyed the evening. Without the moon, the stars came out in force and the night cooled off as we broke up to sleep. Waking up to the rumble of a dead rise skiff the next morning was the most gentle way to be roused from one’s berth.

The breeze was fickle early on, but enough showed for my favorite sailing to windward back up the East River and home. I had to pull out LUNA’s 12′ sweep to get there, but it was worth the short rowing. Top speed to reach the wind maybe 1.5 kts of consistent effort. DORY was leaving the marina as we sailed and got this shot.

Overall, the sailing was good, the company great, and as always I’m ready to go again.