First 1/2 day of  Spring and the weather was perfect for a sail. 70 degrees, sunny, and winds around 12 kts. I did roll the boat out and gave her some sticks. Who knows how often I’ve stared at the sail plan and my small model of the Sooty. I don’t know why I’ve doubted my build’s accuracy, but the mast steps and partner locations were darn near dead on. Good.

It was really a thrill to see the masts in place. Soon … very soon … she’ll be afloat. (back to work).
Using a plumb bob and my iPhone “clinometer” app, I was able to fine tune the two mast positions and confirm the main mast partner locations. Somehow all the parts fit and were aligned per drawings. Good stuff. 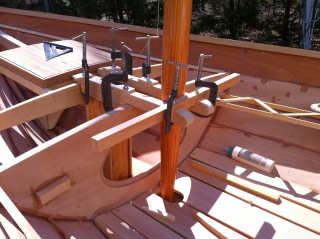 True to my chaotic work habits, the next thing I knew I was cutting a hole for the boomkin! I had intended to add fairing fillets to the bench supports. It is time to sand the interior. Perhaps it would have been easier before adding the floors, but my interest wasn’t inclined at the time (and likely won’t be that strong even later).
So, using cadd, a paper ellipse template was drawn and taped to the hull’s shear plank.  After a careful eyeballing of the template’s position with the boom, rudder swing, and centerline, pilot holes were drilled and the coping saw put a hole in my boat. 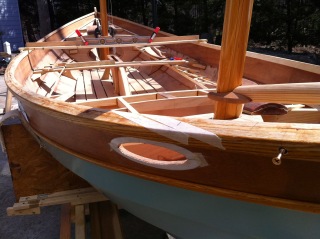 As Luck would have it, no matter how I located the boom kin, the rudder head struck it when swung to the extreme. So much for all the care! Elongating the hole and filing the inside curve still didn’t get it right. Back to the computer to produce a longer outside ellipse for the same hole fixed things as I used this added length to allow for shifting the hole forward and effectively outboard.

These oak rings were shaped by hand saw, plane, and then belt sander. Then a pass through the table saw gave me two which were easily cut with the jig saw for the inner ellipse. The hull was sanded where the trim was epoxied in place.