If you hadn’t gathered, we typically sleep either in the bottom of our boats, or in a tent, and are forever rolling over because the sleeping bag has you notted up once again. Therefore, it can be quite disorienting to sail all day, enjoy cocktails, have a marvelous meal prepared for you and find yourself waking up in a queen sized bed. However, it was so for the inaugural cruise of The Old Bay Club. We’re basically a confederation of not so daring sailors who love their comforts and detest rules. Why Harris and Barbara were so gracious to open up their beautiful home to this motley crew, I’ll never know. For 2 1/2 days we were allowed to stay at their “bed and breakfast”. To come home rested after a great weekend of sailing was an unusual pleasure.

From their place on the James River we 4 boats sailed downriver to see replicas of the three ships that began the settlement of the colony.

The original Susan Constant, Godspeed and Discovery set sail from London on December 20, 1606, bound for Virginia. The ships carried 105 passengers and 39 crew members on the four-month transatlantic voyage. A 17th-century source noted that a total of 71 people were aboard the Susan Constant, 52 aboard the Godspeed and 21 aboard the Discovery. The expedition was sponsored by the Virginia Company of London, a business venture that had been organized to form a colony in Virginia. The fleet reached the Virginia coast in late April and, after two weeks of inland waterway exploration, arrived at the selected settlement site on May 13, 1607.

Our voyage was not so world changing nor daring, but we did complete ours successfully. Winds were westerly for an off wind sail to and an easy 2-3 tacks home to weather. We practically hit the tidal current perfectly coming and going. Fall’s colors were near peak and the winds fairly gentle. Very nice.

The sail downstream was maybe 1 1/2 hrs. We beached just upstream from the Jamestown ferry to stretch and have lunch.

Here’s an interesting contrast of boats and technologies. I wonder how the 3 ships stayed together as their sizes are so different. 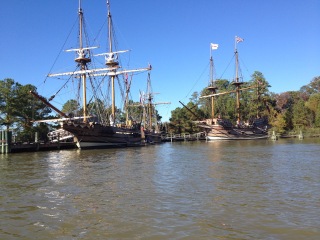 The second day was spent drifting up the Chickahominy on the incoming tide. Now 5 boats, 4 of us even lost steerage at one point as Barry in his light Melonseed proceeded to sail away.

Winds never saw 5 mph, but the day was still a winner on such a beautiful river.

And Barry after. Way up ahead is Caesura’s red sail dead center in this pic.

We had a short lunch on a short beach among the cypress stumps. It was all other worldly. 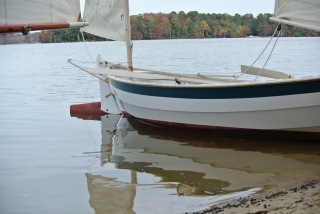 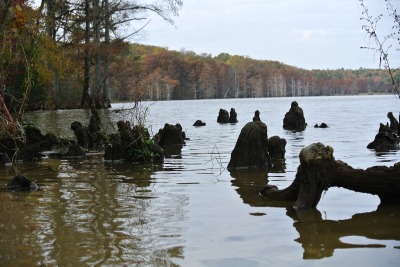 The return faced the current and challenged the sailor. It demanded staying in the shallows and chasing stripes of wind on the water. The following day was grey with a drizzle. Some sailed. Some packed and went home. Great weekend. Thank you Barbara and Harris! 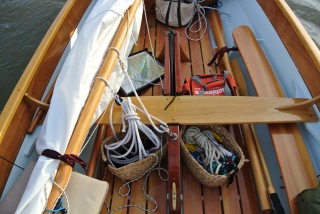 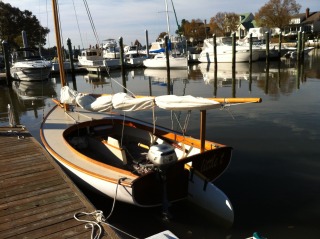 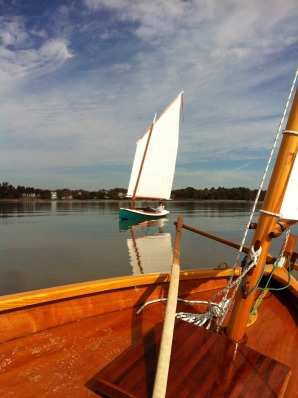